On July 7, Citrix disclosed 11 new vulnerabilities in the Citrix Application Delivery Controller (ADC), Citrix Gateway, and Citrix SD-WAN WANOP appliance devices. Following the disclosure of these vulnerabilities, Citrix published a blog post noting that there were some barriers to exploitation, but encouraged customers to apply the security fixes as soon as possible. Shortly after the disclosure, Dr. Ullrich of SANS Internet Storm Center (ISC) detected unidentified exploit attempts leveraging some of these vulnerabilities, which appeared to be probing for vulnerable devices.

The following is the list of vulnerabilities that Citrix patched as part of their recent CTX276688 advisory:

Of the 11 vulnerabilities patched by Citrix, attackers are attempting to exploit the following CVEs in the wild:

CVE-2020-8195 and CVE-2020-8196 are information disclosure vulnerabilities found in the management interface with either user access or after exploiting the auth bypass on the device. By sending a specially crafted HTTP request, an attacker could retrieve important device information like configuration files. At this time, it’s unknown which of these two vectors are specifically being used to target victims due to the similarities between the vulnerabilities.

These three CVEs were discussed in a technical writeup by Donny Massland, one of the researchers credited with reporting five of the 11 vulnerabilities, where Massland discusses the potential impact of exploitation of these vulnerabilities.

Well, since people wanted to know, here is my write-up for the Citrix vulnerabilities I found last January (including local file disclosure!):https://t.co/XkubhdVpv9

Exploitation in the wild

On July 10, the NCC Group’s Research and Intelligence Fusion Team (RIFT) detected active exploitation of a subset of the vulnerabilities Massland disclosed.

NCC Group subsequently published their own blog post about the flaws, detailing the detected exploitation alongside the information gathered by SANS and created a timeline showcasing disclosure to exploitation. 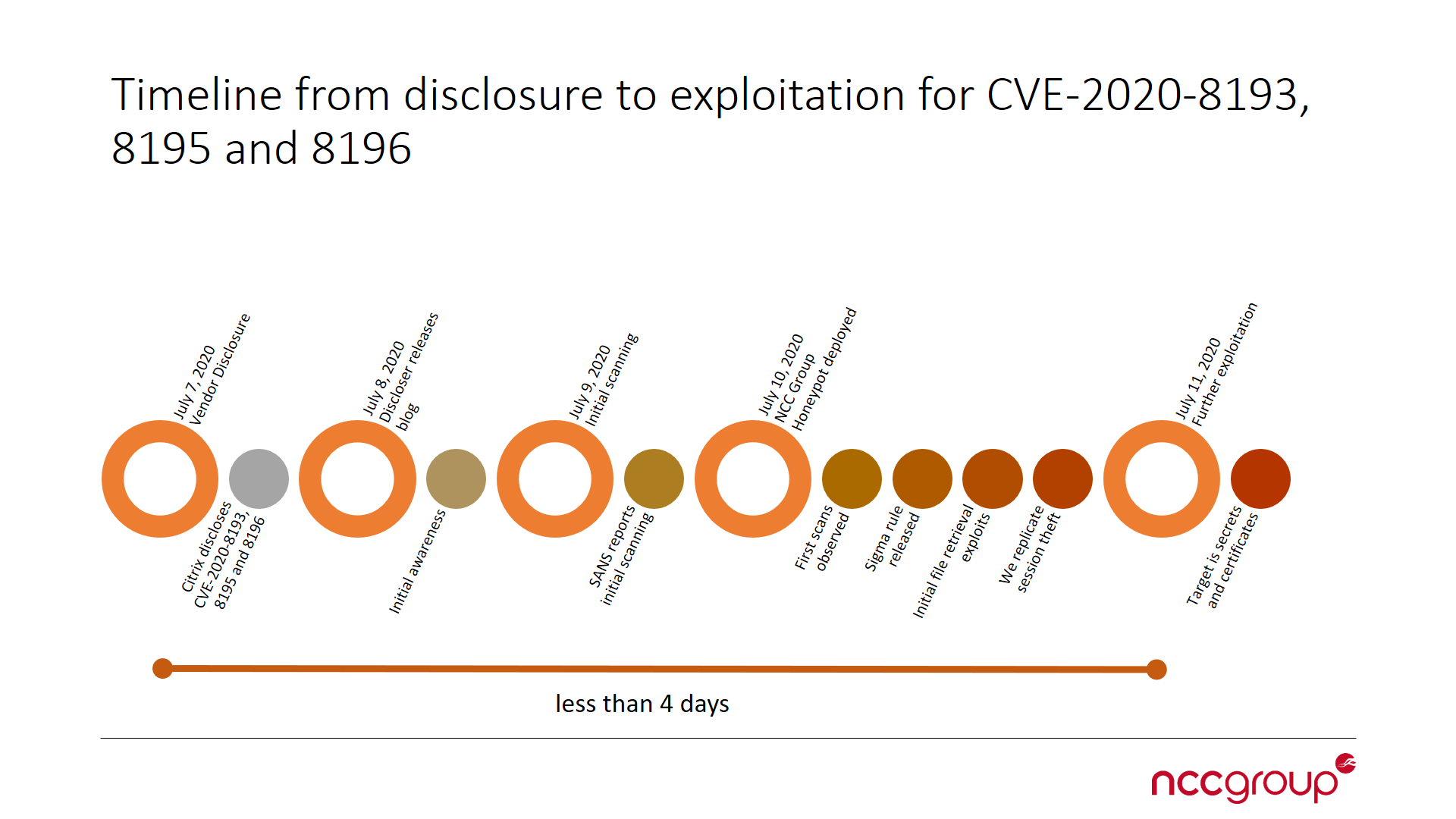 The quick turnaround time from disclosure to exploitation from the detected threat group matches up with attacks by the same threat actor that NCC Group observed utilizing the F5 BIG-IP vulnerability that was disclosed on June 30. Within less than a week from disclosure, vulnerable assets were being successfully exploited.

Citrix has released patches for these vulnerabilities, and lists the following versions as fixed:

Tenable strongly recommends applying these patches as soon as possible, especially now that active exploitation has been observed in the wild.

A list of Tenable plugins to identify these vulnerabilities can be found here.

A Practitioner’s Perspective on Risk-Based VM: What People, Processes and Technologies Are Required?